This post is co-authored by Scott Dixon @scottdixon and Pavel Kirienko, long-time maintainer and BDFL respectively.

As most of you know by now, there has been a fork of UAVCAN v0 codebases by a new open source project, DroneCAN. This new project has agreed to take on the maintenance and continued development of the UAVCAN v0 specification and the UAVCAN v0 tools and reference implementations. The current state where uavcan.org and github.com/UAVCAN are not the definitive places to find UAVCAN v0 is not sustainable and so we, the UAVCAN maintainers, have decided to embrace DroneCAN stewardship of the UAVCAN v0 protocol and to rebrand the UAVCAN project as an umbrella for development and promotion of technologies based on UAVCAN v1. Furthermore, to reduce confusion, we will rename the UAVCAN v1 protocol to Cyphal* and will call the tools and reference implementations developed in support of Cyphal, OpenCyphal†.

We regret the confusion this transition period has caused as we regret that the v1 effort was not welcomed by the existing user base. V0, and now v0.5 (which is the CAN-FD variant of v0), was always targeted to the simplest use cases and optimized for consumer UAVs and robotics. V1 was an effort to elevate the protocol even as the UAV industry is rising from a dedicated base of enthusiasts and academics into an industry. It was an important step forward in terms of interoperability and formalism and we hope DroneCAN will use the v1 specification as a roadmap for improving the wire-level protocol and increasing interoperability through the same data type evolution features v1 introduced.

Cyphal starts at this end. It brings the lessons learned from building a protocol for deeply embedded software, up to sophisticated robotics systems. It sets a roadmap for a future where Ethernet technologies are ubiquitous even in the hardest of real-time systems and the most critical of safety functions. It proposes an audacious concept of “lab-bench to production” where the communication protocol used to experiment, prototype, and test UAVs, advanced automotive systems, and other robotics evolves with the project to become part of the deployed system. The OpenCyphal project will incorporate lessons from the wild success of Ethernet and IP networking technologies, the economy of CAN bus technologies, and the rigor of aerospace methodologies. We present figure 1, “A Brief History of Serial Protocols” to provide the context for Cyphal as we see it and to show our expectation of a slow deprecation of CAN technologies in favor of new IP networking technologies over the coming decade. 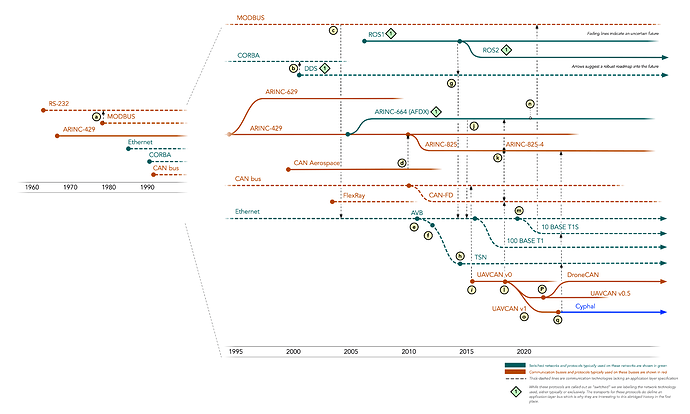 b. DDS Borrows an Interface Definition Language from CORBA

d. Airbus approaches ARINC to request a new CAN standard be developed. Michael Stock provides his experience developing CAN Aerospace. ARINC-825-1 is the result.

i. Pavel Kirienko leads an open-source effort to define UAVCAN v0. Initially, it only supports CAN 2.0B

j. Airbus gives a presentation to the IEEE, “Avionics Full Duplex Ethernet and the Time-Sensitive Networking Standard” which proposes incorporating AFDX into the TSN standards.

l. Amazon Prime Air defines a minimal set of changes to v0 adding CAN-FD support. The unofficial variant is dubbed v0.5. At the same time, at the Stockholm Summit, v1 was conceived.

p. DroneCAN takes over maintenance of the UAVCAN V0/V0.5 specification and advancement on top of it.

q. (today) UAVCAN v1 is renamed Cyphal. It promises to provide TSN/CAN interoperability and to be the first messaging protocol defined for 10 BASE T1S.

What are the next steps then? Starting immediately the UAVCAN community and maintainers will do some housecleaning to improve the overall health of the organization:

With this reset complete we will begin the definition of Cyphal 1.x (where 1.0 is the existing UAVCAN v1 specification, renamed):

On its face, this is just a renaming and cleanup exercise so the project is not, in any way, throwing away what it has built in UAVCAN v1. Fundamentally, however, Cyphal will shift from a protocol that was a better I2C, to a protocol that ties together the sub-systems of modern robotics systems, automotive autonomy functions, air mobility vehicles, package delivery drones, and any other cyber-physical system utilizing intelligent sensing and actuation components.

* What’s in a name? We struggled with a new name for this protocol wanting to avoid obscure acronyms (UAVCAN anyone?) and completely random nouns (Nunavut anyone?). Cyphal is an invented word; a portmanteau of Cyber and Hyphal. The former references cyber-physical systems which is a generalization of the type of system this new protocol is optimized for. The latter describes Hypha, branching structures found in the fungal symbionts of mycorrhizal networks. And by that circuitous route we create a name meaning a cyber-physical, low-level, and tightly integrated network.

† Why call Cyphal a standard and OpenCyphal a project? Cyphal will always be an abstract standard that can be implemented from scratch given only the specification. OpenCyphal is an open-source implementation of parts of this specification to facilitate the “lab-bench” side of Cyphal’s “lab-bench to production” design tenet. We welcome commercial development on top of the specification and other open-source projects to replicate our work. In a future where there are many “Cyphal stacks” available, OpenCyphal will serve as a brand name for the software written while developing the abstract specification.

5 Likes
pavel.kirienko (Pavel Kirienko) March 25, 2022, 6:16pm #2
Should the entire UAVCAN project adopt the new name — Cyphal — or should the old name be retained?